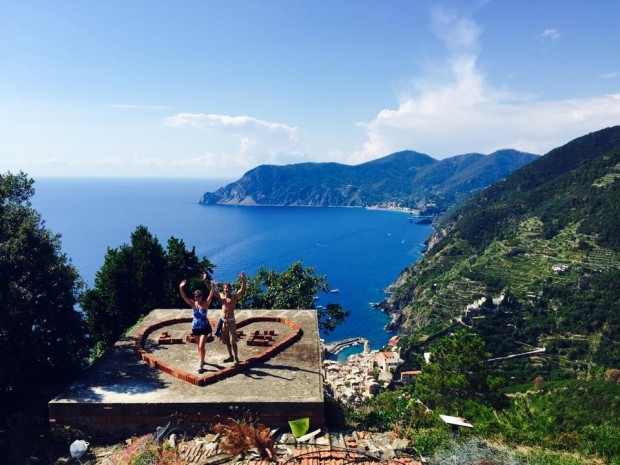 Getting Lost in Cinque Terre…

If you’ve read any of my previous blog posts; you’ll have realised how much I loved Cinque Terre. It offered me a type of paradise with its beautiful mountains, coastline and picturesque five villages dotted throughout the area. Last time I had the privilege of going with Kristine (on a chaotic train ride) and loved it all so much that this time I managed to convince Sam to drive the 75 miles from Parma to La Spezia.

We arrived in La Spezia within 90 minutes of leaving Parma; thanks to the direct roads (probably helped by the super expensive toll charge of nearly 15 euros!). We were welcomed by beautiful weather, however, quite chaotic roads and a lack of parking. We spent the first hour or two of our Ligurian adventure seeking out free parking and getting quite lost with it. But, eventually we found some; if you search Army Building, La Spezia; you’ll find free parking pretty much outside it.

We shared a cone of piping hot, fresh calamari as our first snack of the day and both concluded that we could happily live off the stuff. After checking into our apartment (up four flights of stairs… which I saw as preparation for the forthcoming Cinque Terre hike!), we caught the train to Riomaggiore. I introduced Sam to farinata (chickpea pizza) and we had a couple of extortionately priced Birra Morettis with it. Sam wasn’t so impressed with the farinata so picked himself up some deep fried mixed fish for lunch (complete with anchovies, whole prawns and more calamari). We then embarked on our first hike of the day; to Manarola. 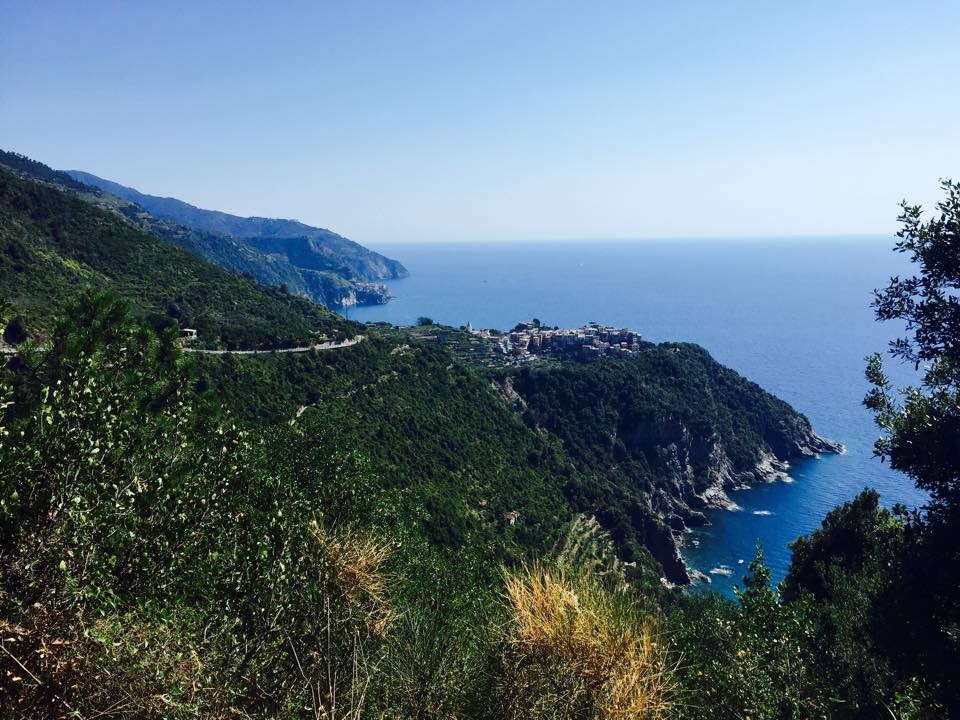 We ended up walking the longer, ‘red’, route to Manorola as the shorter ‘blue’ route was closed. Told it’d be a 2 hour walk, we ploughed on and less than 50 minutes of sweating and panting up hilly, rocky terrain, we reached Cinque Terre’s second village of Manorola; where we guzzled down water, local wine and gelato. We sat by the pier, soaking in the sun, and watched, with envy, people jumping into the water. We caught the train back to La Spezia and sought out some aperitivo with happy hour cocktails for 5 euros. Seconds later we’d ordered Italian Iced Tea (with the added Disaronno) and an AppleTini. And, oh boy… these were strong, so strong that I swear I was a bit light on my feet after just one. That’s what hiking without enough liquid does to you, I suppose. We then went out for a fairly drunken meal at a cheap pizzeria where we ordered insalata di mare, a pizza, trofie con pesto (the local dish), half a litre of white wine and water for under 30 euros. 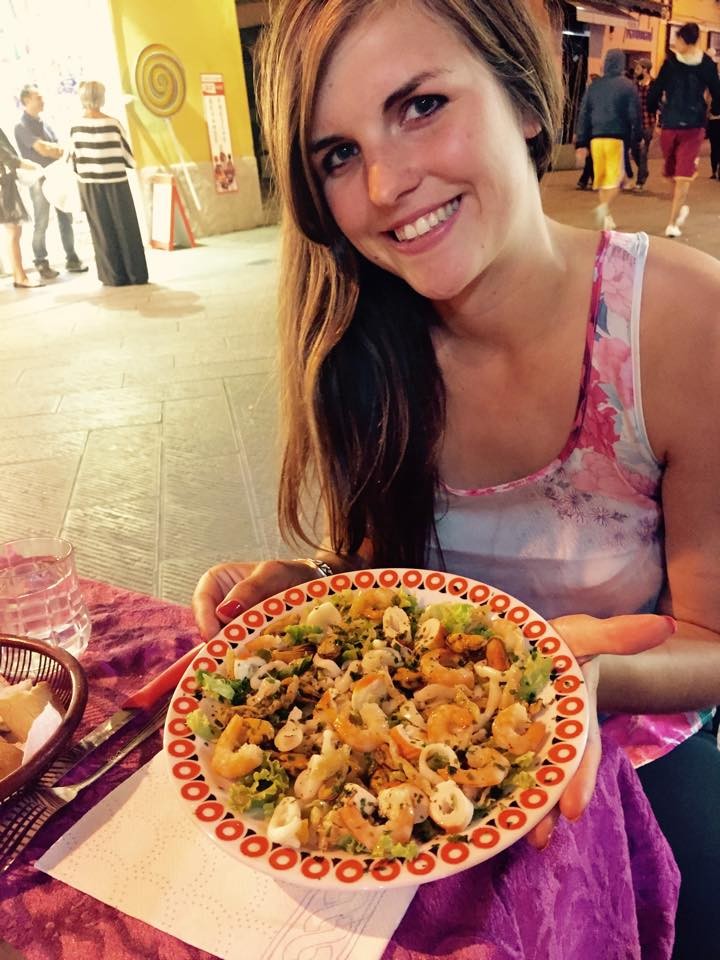 Me with the Insalata di Mare

Day 2 in Cinque Terre started with breakfast in bed and a LOT of itching (thanks to the numerous mosquitos who obviously had a field day on the both of us!). Netherless, we persevered and caught the train to Manarola where we commenced our first hike with slightly achey heads (thanks cocktails) and legs. Again, we had to take the red route, which led us up a never-ending number of steps to the top of the hill. We then scaled three mountains until we descended down some rocky terrain to the third village: Corniglia. Cinque Terre’s third village is situated within the mountains; offering beautiful views of the rest of the area. We were ravenous by this point and queued for over ten minutes for some pizza by the slice (pepperoni for Sam and margherita, weirdly – for me). I also bought a Corniglian lemon granita (think slush puppy but way way better). 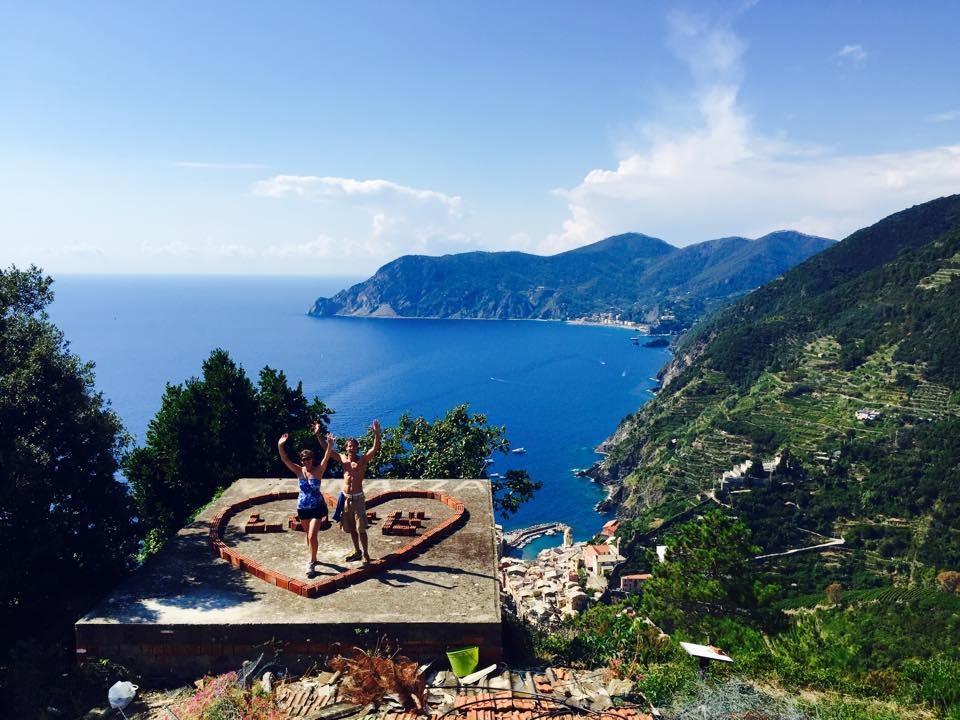 Going the red, non-touristy routes can have its benefits… look what we found (corny, I know!) 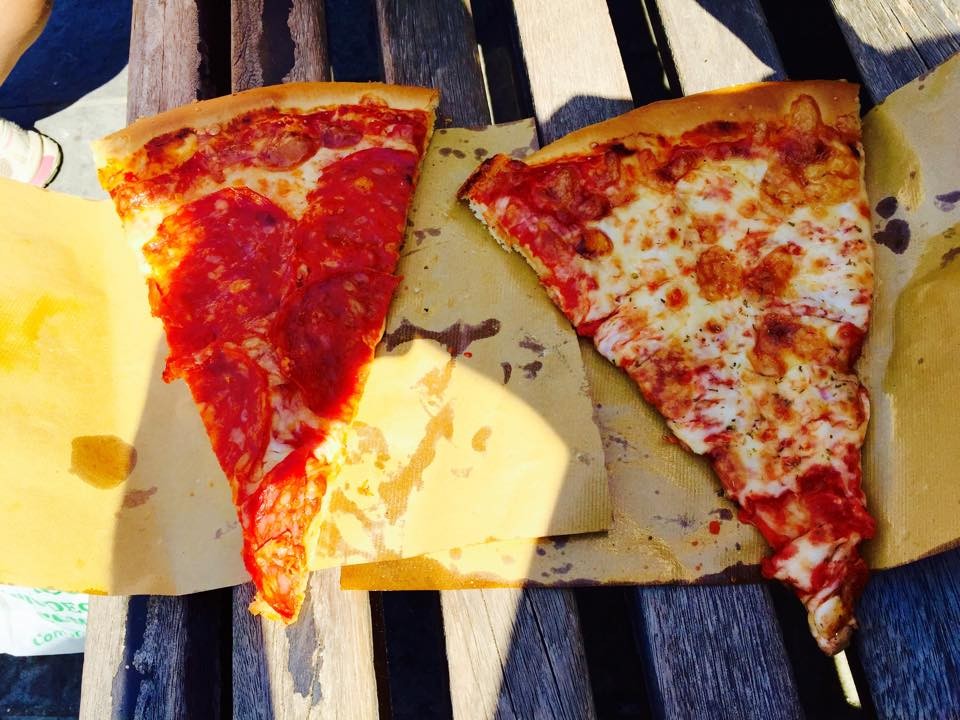 Our very American looking pizza by the slice… 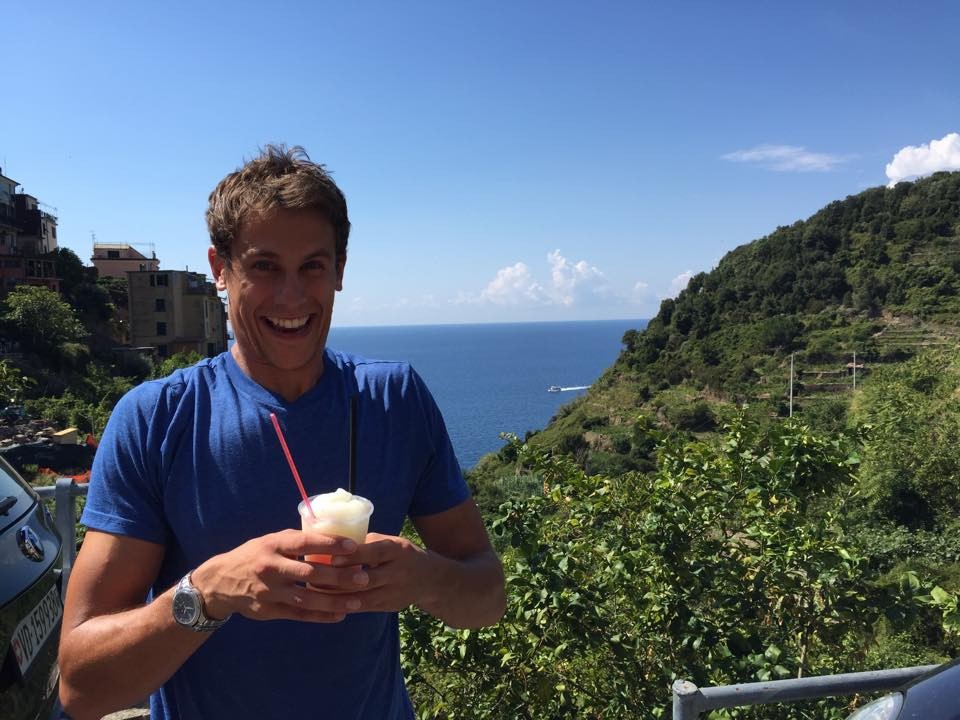 After devouring our pizzas in rapid time, and Sam buying another granita as he loved it so much; we set off on our second red hike of the day to Vernazza. This route basically took us on an ascending main road, right up to the top of the mountain; which actually made for easier walking, and then back to meet the blue path. We stopped off in Vernazza for gelato and then ploughed on to Monterosso (the longer, red route again, of course!). We should have worked out when we asked the locals ‘which way to Monterosso’ and they said somewhere completely different, that the way we were going was wrong. However, it took us 50 minutes of zigzagging up a mountain and a quick look at Google Maps (Telling us we were 12km away) to realise that something had gone massively wrong. 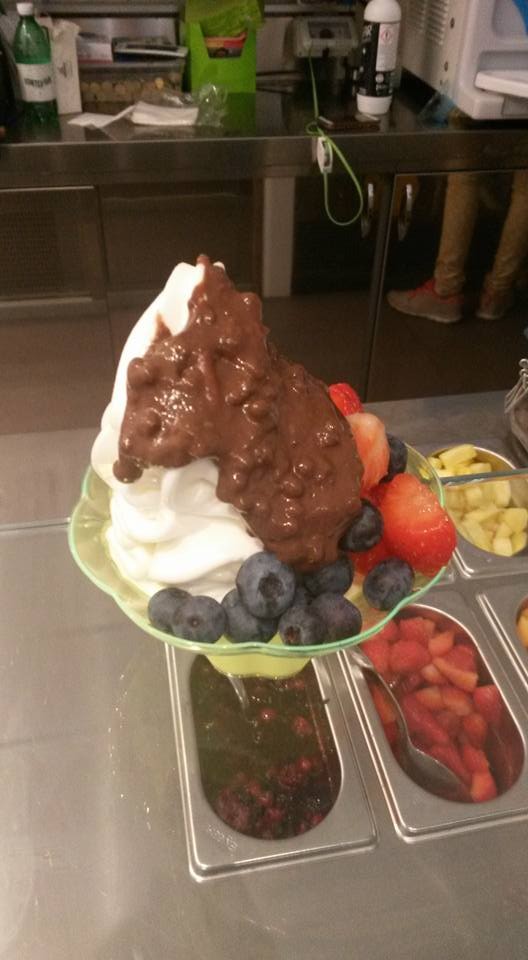 A much deserved frozen yoghurt in Monterosso…

Rather than walk for a further 3 hours in the 30C heat with no water; I flagged down a car and we were lucky enough to be given a lift by two lovely Germans all the way to Monterosso (which was in fact 12k away). I’ve never liked Germans so much… Arriving in Monterosso, it felt like we’d come across a swarm of ants – unlike when I visited last year in April, it was SO busy. Aren’t kids meant to be back at school?! So busy that it lost a little of its charm

We did eat some delicious pesto lasagne though, and we both enjoyed a much deserved swim in the sea.

We spent our evening in La Spezia and enjoyed the nicest meal of our Ligurian trip. I’ll be writing a review of this shortly so watch out for it, as I’d hugely recommend it. Neither of us particularly fancied wine, so we ordered a bottle of sparkling San Pelligrino (I’m getting into this sparkling malarkey now!) and opted for insalata di mare and saute di cozze e vongole (mussels and clams) for our starters and carbonara di mare and taglione di pesto e gamberoni for our mains. Both courses were absolutely delicious and now, writing this, all I want is to eat them again. 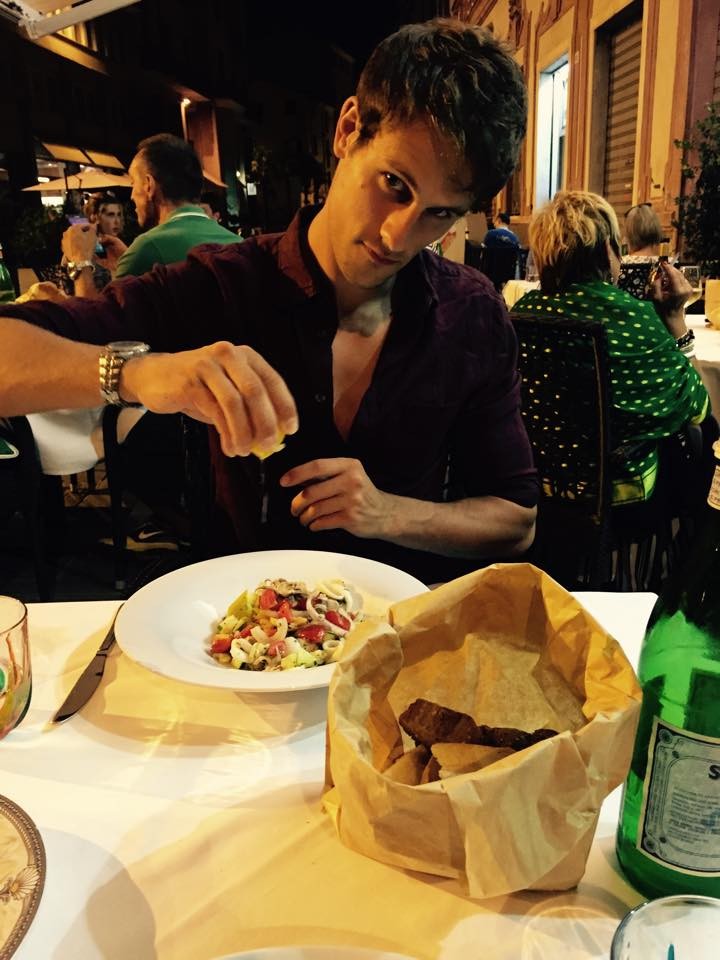 Model shot of Sam – lemoning up his insalata di mare!

We went to bed, exhausted and slept right through (ignoring the hungry mosquitos) until 630am the next morning; ready for our drive back to Parma Airport. Ah, home time. I dreaded it all week and it came so quickly. Oh Italy, I miss you already. Ah well, I suppose MYO can’t run without me (For the moment, anyway!)