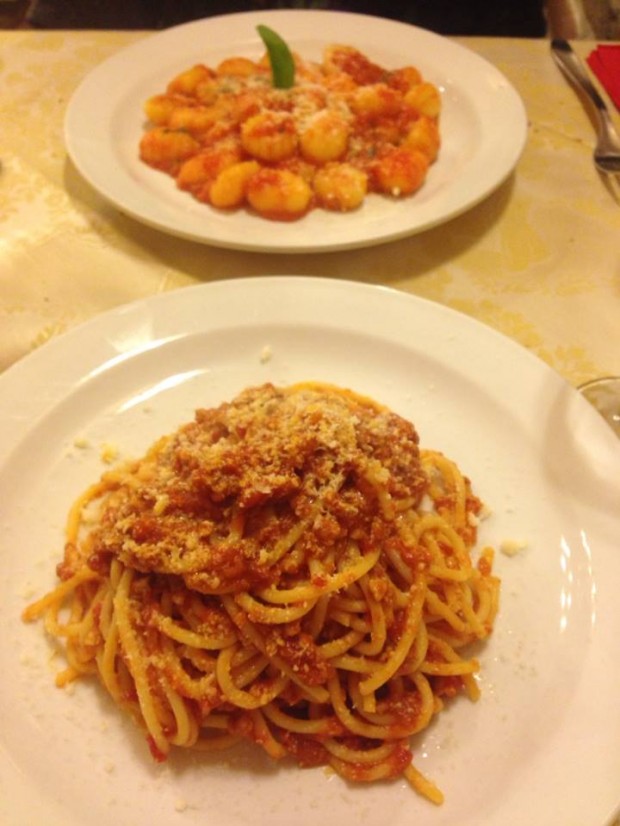 I may be coming across as a girl who does in fact eat more than once at a place when I go travelling but in this instance, there didn’t seem to be much other option. Termini, despite being considered ‘central Rome’ and being full of hotels, hostels and main transport links really is lacking in the food and drink stakes. An entrepreneurs dream you could say… However, I don’t think I’d like to compete with the street vendor ambush, crazy drivers and angry Italians – but if you can, and fancy opening up a restaurant, Termini may be a good shout.

I first discovered Trattoria Angelo for lunch with Ben and I had a strict budget in mind – being 5 euros. To me, lunch in Italy is about grabbing a snack to go, however, my only requirement was that snack not to be pizza. I know, I know I’m here to do the grand tour of Italian pizza but if it was possible to be on the verge of a pizza overdose, at this point I was feeling it! So, after much searching around we settled on Trattoria Angelo as it had reasonable set meal deals – 10 euros for a pasta dish and drink or 12 euros for 3 courses and a drink. We took a seat outside, on one of the orange and white table-clothed tables and agreed to share a set menu and lasagne (as Ben had been craving it). We settled on carbonara, followed by roasted veal and the dolci of the day (in this case, strawberries). 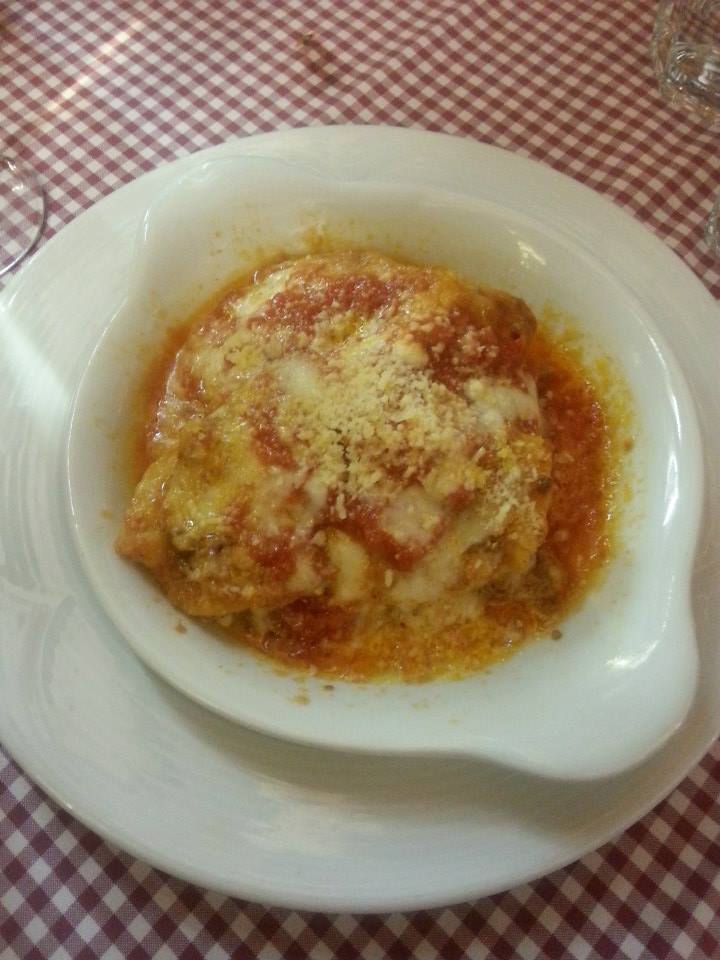 To be completely honest, the main attraction of the menu was the salad! I hadn’t had a green thing touch my mouth since Palermo and the grease and carbohydrates from the deep fried ‘snack food’ of Rome was taking its toll. Anyway, the standard secretly charged extra ‘bread’ arrived and of course, despite what I said about not wanting dough, I ate it. It was pretty good for mass produced tourist bread, especially when dipped into the overly-acidic balsamic vinegar. The carbonara came with the salad and was a pretty hefty portion. I still can’t get my head around why Italians eat pasta before their main course of meat or fish, maybe to keep costs down so you fill yourself up on cheap ingredients rather than expensive meat? Carbonara in Italy is very different to that in the UK, instead of being made with cream, bacon and tonnes of cheese, it’s much simpler as it’s only made with parmesan, panchetta and egg. The overall effects are a lot more colour (yellow/orange) and a much simpler and manageable sized meal. The lasagne wasn’t the best we’d had but Ben still devoured it.

The veal arrived and unfortunately, it was pretty laughable – a tiny battered piece of meat, breadcrumbed and served with greasy canteen like roast potatoes, it didn’t look the most appetising. It tasted a lot like chicken, or a very disappointing Bernard Matthews turkey escalope so I let Ben eat the majority of that. Nice, I know. The meal ended with the strawberries, squirted with cream, which I had absolutely no complaints about – ah, vitamins! All in all, for a quick and cheap lunchtime meal, for only 9 euros each, you can’t really complain about the food you got for the money.

My second visit was for Steph’s last night in Rome. We’d intended to have a really nice four course set menu but quickly realised we could find nothing central in our budget and couldn’t be bothered to get a bus out of town. So, we settled on the delights of Termini. Walking around for ages, we concluded (for the second time, for me ) that Termini really has nothing, hence why we ended up at Trattoria Angelo AGAIN. The night time scene wasn’t much different in terms of both lighting and ambiance but the service was ten times as quick – it almost felt like we were on a conveyor belt as we hadn’t even finished our food before the next course came out! Also, they charged ‘coperta’ (service) in the evening, and for worse service! Odd. 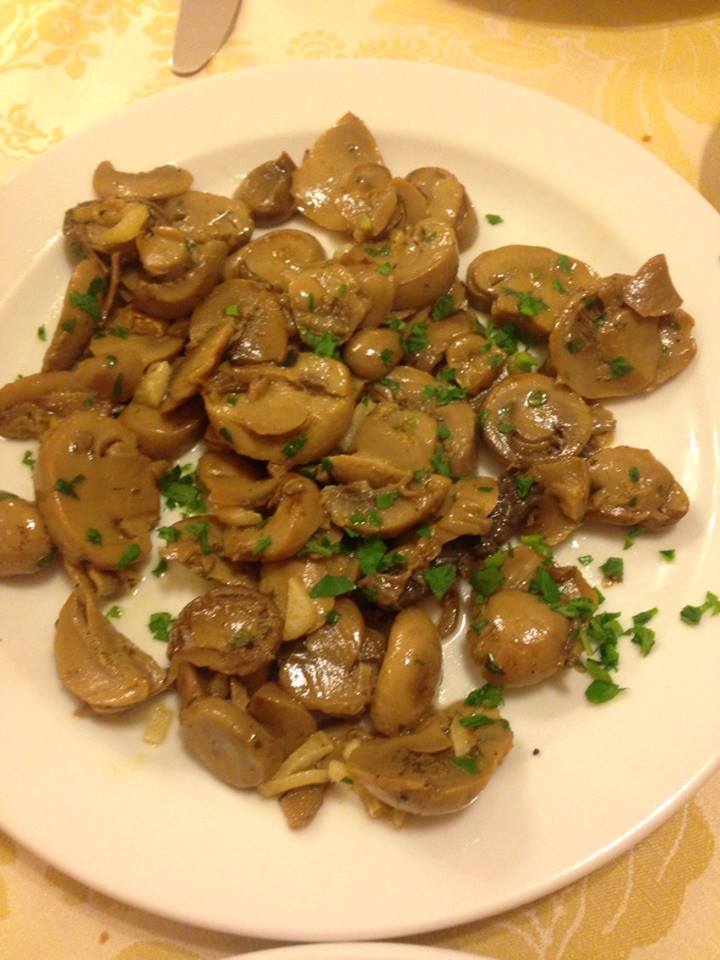 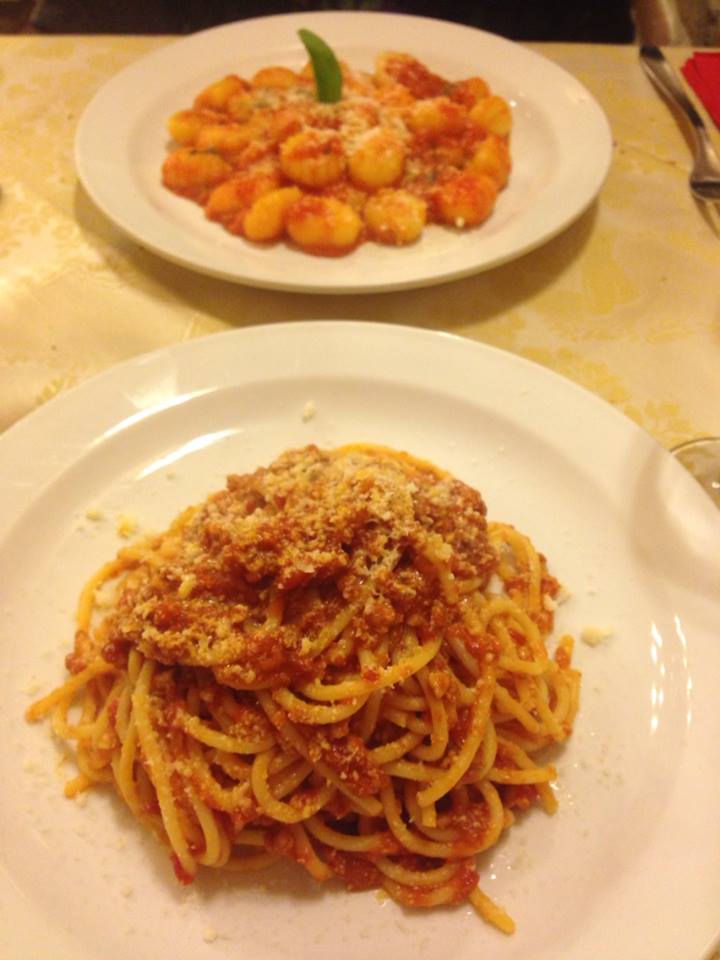 This time round we both had the 12 euro set menu – ordering the gnocchi and spaghetti al ragu to start, roast chicken and roast pork for our meat course and decided to share a plate of truffled mushrooms as our antipasti. Steph ordered a glass of house wine for 4 euros and I settled on water. The mushrooms arrived within ten minutes and were pretty awful – they didn’t have an ounce of truffle on them and tasted like they’d been cooked in white wine vinegar and lemon. I even complained, which is something people should probably never do in Italy, given their passion for food but it was THAT bad. The chef even came out and admitted he put too much lemon in, yet no apology and item still charged on the bill! Service in Italy does seem to be on a different level to that of the UK – a lot more relaxed, almost forgetful and definitely not customer centric. 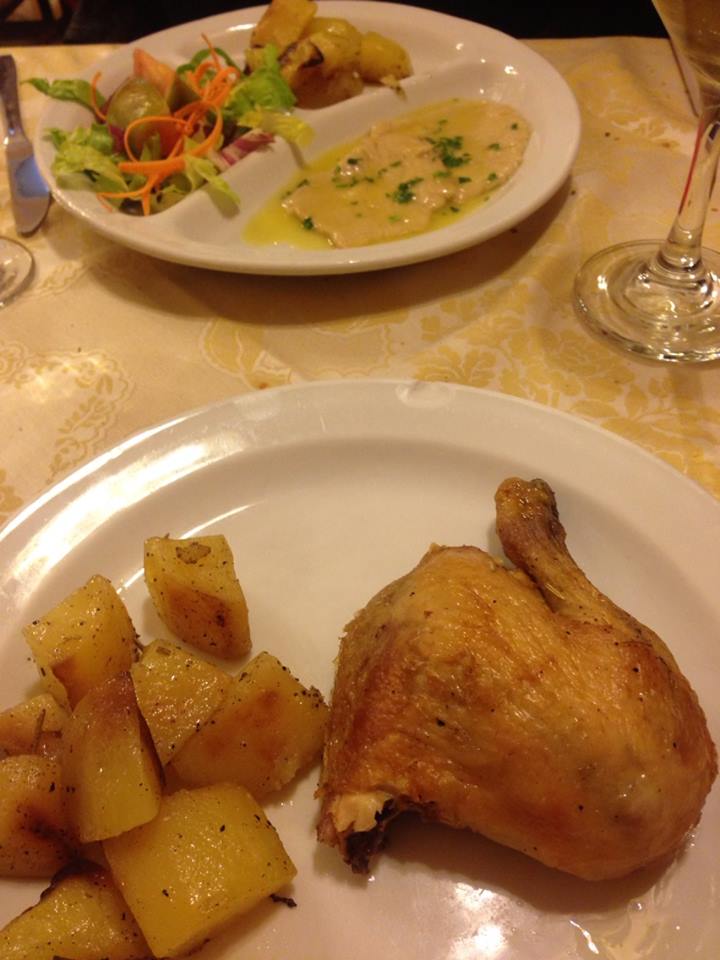 Everything else was fine and our pudding was fresh pineapple, which due to the speed of food delivery, I found hard to eat as I think I had mild indigestion from speed eating. As we couldn’t fully trust the standard of Angelo’s pudding selection, we decided to go elsewhere for tiramisu. We quickly settled on Twins Bar as I’d seen tiramisu advertised there during my daily cappucino e cornetto breakfasts with Ben. And, I’m happy to report something was good about that evening – it was the best tiramisu we’d had!

Pretty low recommendation but the standard and quality of food was pretty dire. If you’re desperate and in need of quick food, Trattoria Angelo is an option but don’t expect to taste ‘la cucina romana typica’ or quality.

NTK: Better for a quick lunch than a memorable evening meal.