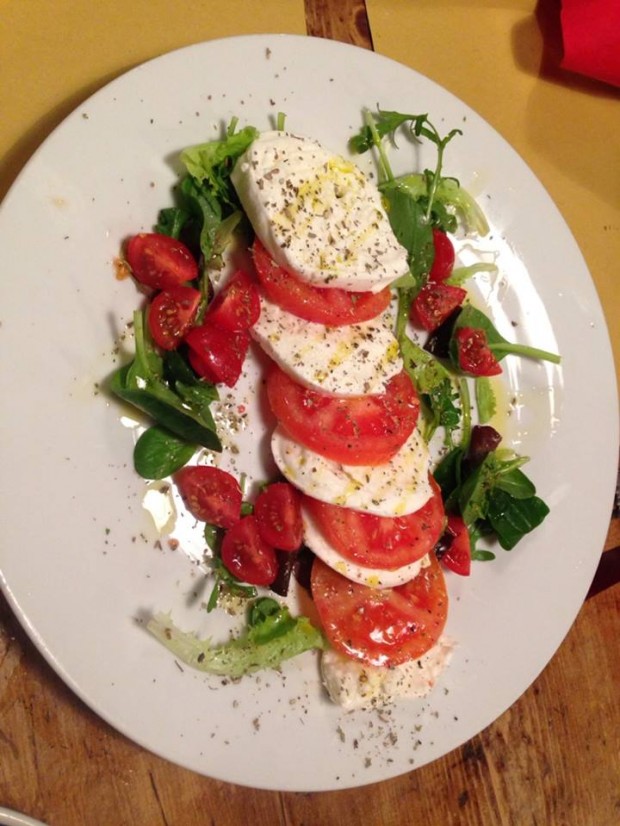 When researching for somewhere to eat last night, I came across Osteria alla Staffa and as near enough all the 4 star reviews were in Italian, I figured it must be good. We’d tried to get a table last night but with only 8 tables, we weren’t lucky enough to be seated without a reservation. However, we DID get lucky tonight! 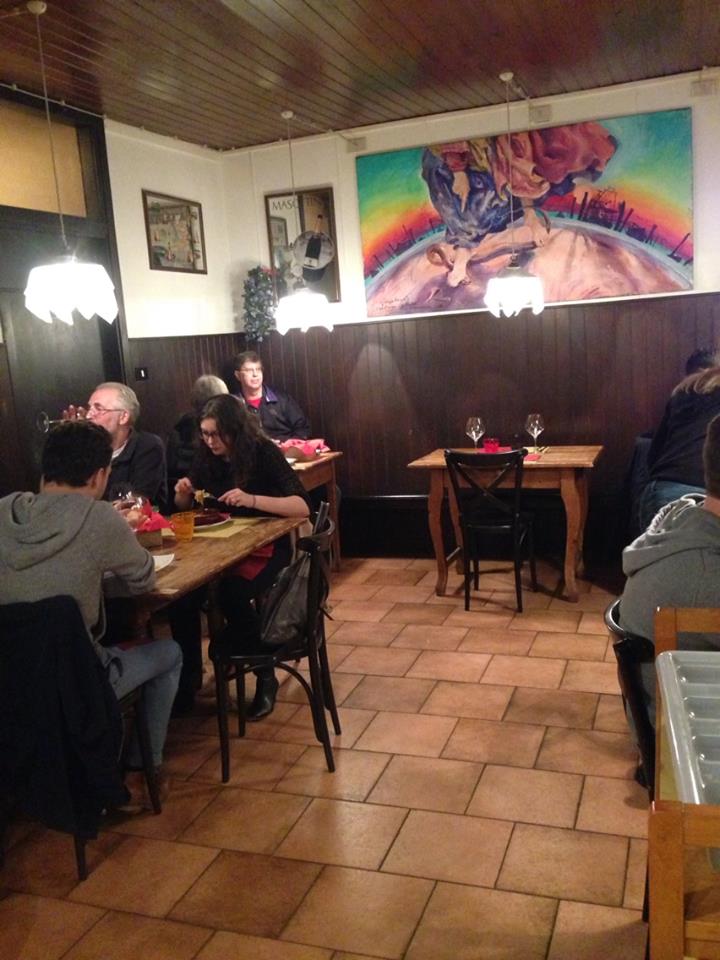 Osteria alla Staffa probably isn’t the type of place you’d just stumble across, as it’s not only located in the Castello district but also on a side street, almost tucked away. On first impressions, with its lack of music and bright lighting, it didn’t feel massively welcoming. However, the service more than made up for the lack of atmosphere, and a glass of Prosecco for only 1.50 euro helped as well… oh, and the leg of ham Andrew almost salivated over. 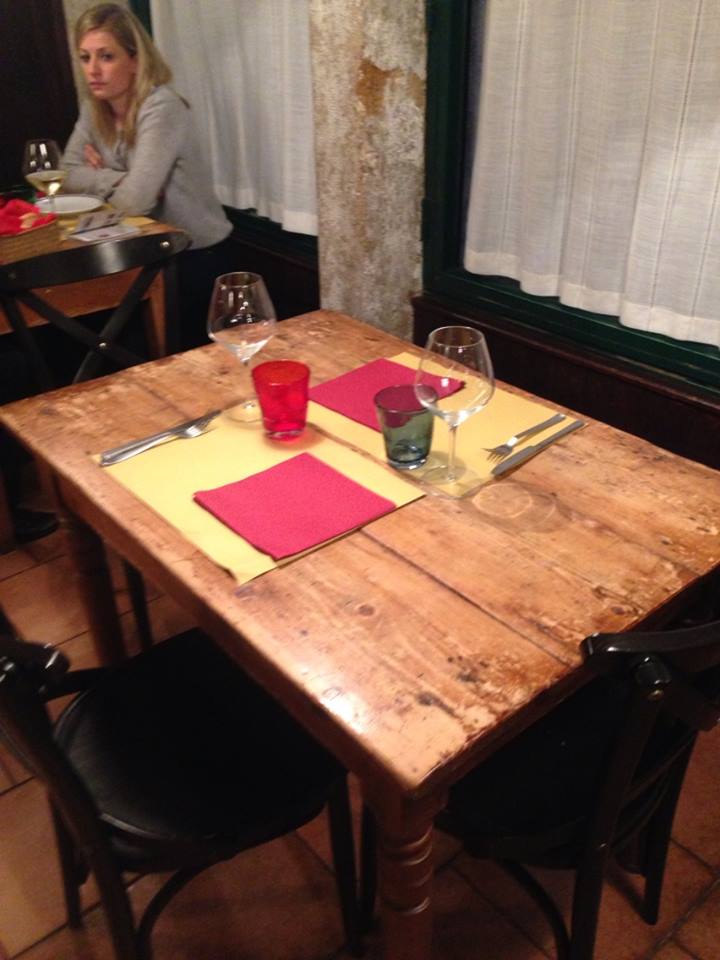 We were seated at a table by the window and I ordered a Spritz with Prosecco for Andrew as a) he couldn’t understand the menu as it was all in Italian and b) he had never had one, and as it’s super Italian, I thought he should experience the bitter taste of Campari mixed with dry, bubbly Prosecco. In short, he hated it – the photo below may go some way in showing Andrew’s reaction! So, I had the Spritz and he had my Prosecco. To make his day, we ordered a plate of prosciutto (ham) and a Caprese (buffalo mozzarella and tomato). Both were delicious, and made a delicious antipasti when sandwiched together with the obligatory bread. 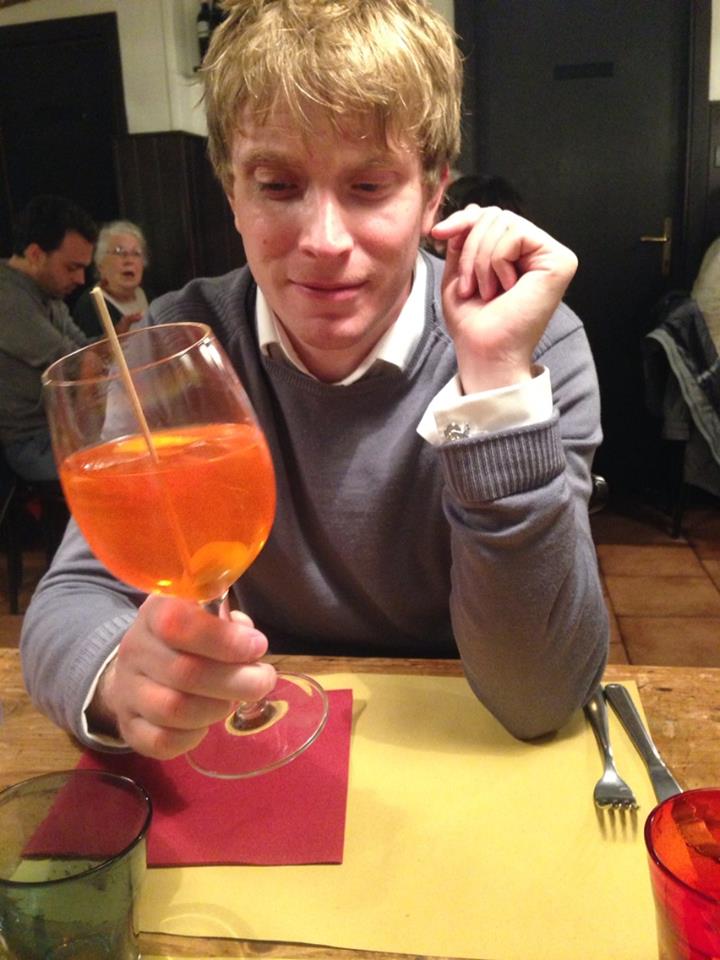 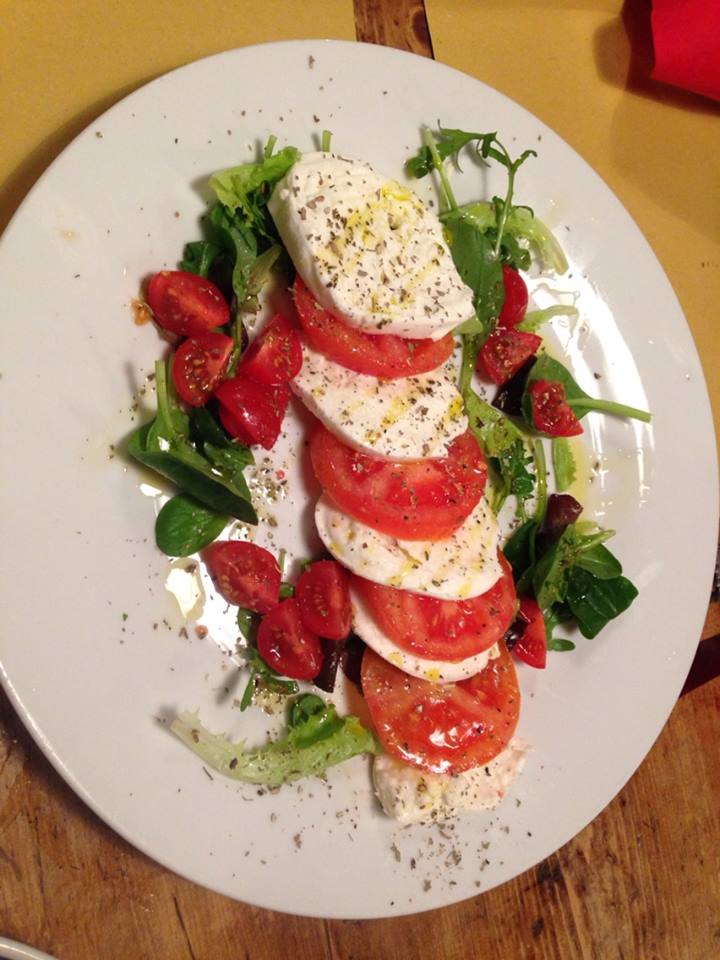 Rather than try and tackle the colossal wine list, I opted to relax on the sommelier front tonight so we ordered a bottle of Prosecco Brut (for a crazy price of 14 euros). Probably not helped by the alcohol drank and the hand writing of the menu, but I also found it incredibly hard to understand the Italian description of dishes on the menu. In the end, I called it a day and asked the waitress to recommend what we should eat. And, I apologise but I can’t actually remember the names of the dishes! All I know is that we ordered something with ‘scampi della momma’ in the description, and a ‘lasagne della casa’ for primi, and beef fillet for our secondo. Oh, and I asked if we could share all of our food and similarly to Enoiteca de Mascareta, the waitress was only too happy to divide all of our dishes into two. 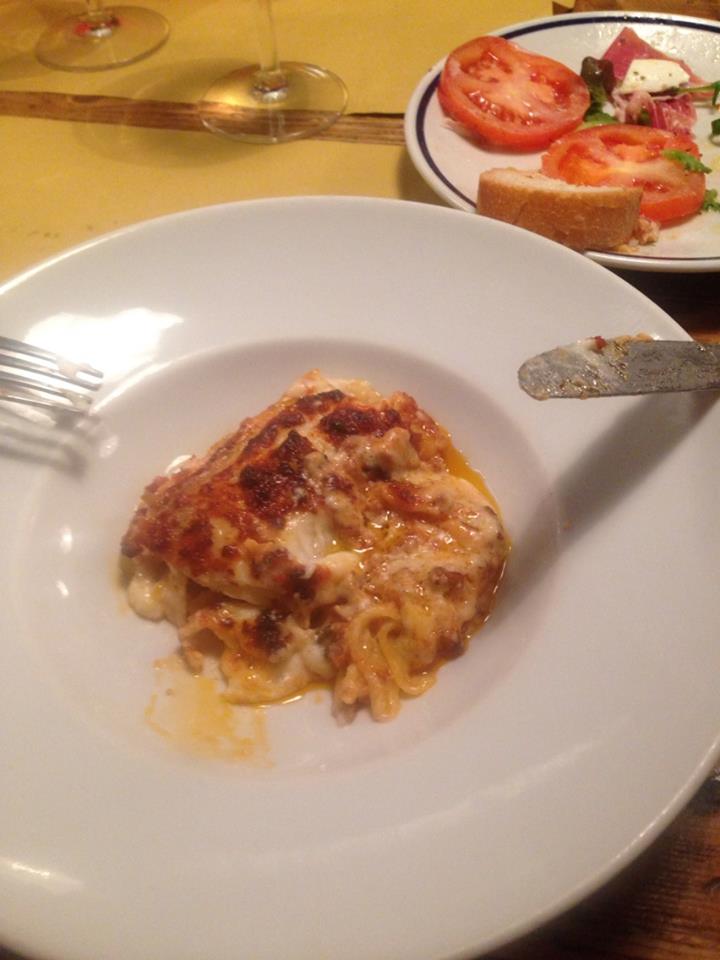 This photo definitely doesn’t do it justice – beef lasagne

The fish pasta arrived first, and as our waitress had mentioned, looked and tasted very much like a fishy lasagne. This probably doesn’t make it sound the most appealing, and I don’t think the photo does it justice either, but it was surprisingly delicious – even Andrew loved it. The pasta wasn’t the thick sheets that you’d find in lasagne, but resembled thin tubes of perfectly cooked goodness. And the beef lasagne was without exaggeration, the best lasagne I’ve had since being in Italy (and I’ve eaten a LOT). I’d go as far to say it might be up there in the best I’ve had, ever. It contained layers of homemade pasta with both bechemel and a rich Bolognese sauce sandwiches between each layer. I could taste nutmeg in the sauce, which gave it an extra edge, but I think the winning factor was that it actually tasted fresh, with the quality of the ingredients taking it to another level after all the microwave tasting lasagnes I’ve had in Italy to date.

Our secondo was possibly my least favourite course. We both received half a beef fillet with a small salad, in hindsight we should’ve probably ordered ‘contorni’ (sides), but after antipasti and two plates of pasta, we didn’t need any more carbs. The beef didn’t have as much flavour as I’d expected it too, and was actually a little too rare for my liking – but this could have been the fault of my Italian rather than Osteria alla Staffa’s. However, Andrew really enjoyed it and even ate half of mine too. 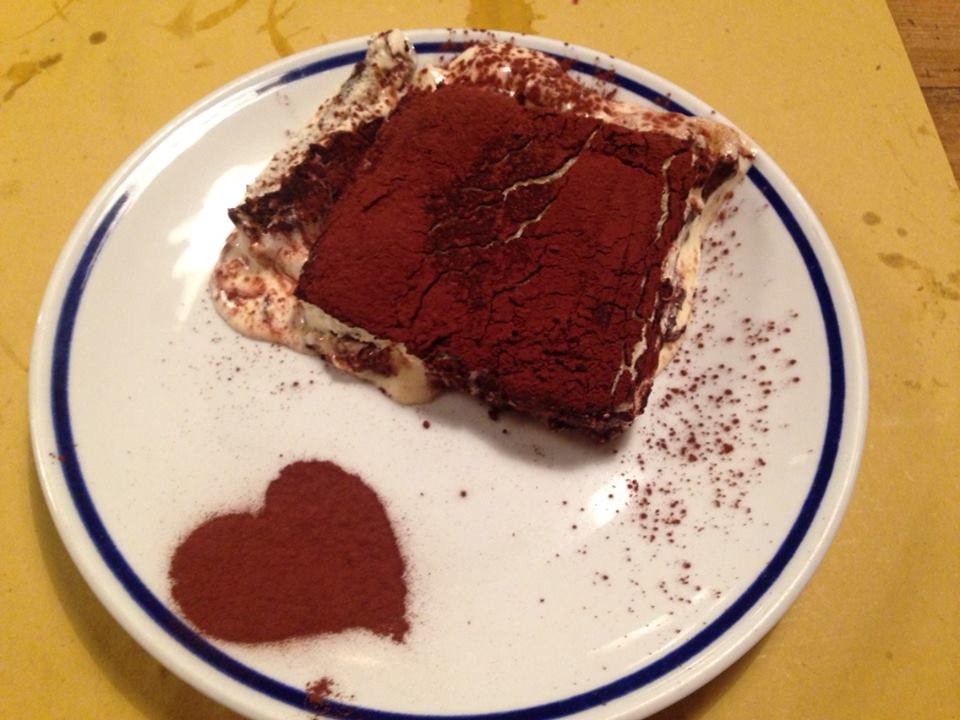 Despite not really needing any more food as we’ve eaten a massive amount today, I wanted to try out the tiramisu as it’s famous in the region, and every other Italian tiramisu I’ve had has been quite disappointing. Also, I thought given the success of everything we’d eaten so far, the tiramisu must be good. And yep, again Osteria won another ‘best dish’ in its tiramisu. Rather than taking on the standard mousse like texture, it was served in a sturdier, layered square, covered with rich cocoa. I even managed to convince coffee hater Andrew to try some, and go back (without encouragement) for a further three mouthfuls until we both called it a day and asked to take the tiramisu home.

Four courses and near enough two bottles of Prosecco later, we asked for the bill. In all honesty, I was worried. Considering how much food and drink we’d consumed, and the quality of it, I thought I’d see stars when seeing the bill but again, we were surprised when the bill only totalled a very reasonable price of 93 euros.

If you’re in Venice, and not staying anywhere near the Castello region then I’d strongly recommend you to find your way there just to visit Osteria alla Staffa. It might be worth learning the Italian for ‘do you speak English’ though (parlate inglese).

NTK: You’ll need to book as the Osteria is tiny and always seemed busy. Also, order the Prosecco Brut (2 euros a glass), it’s 100 x better than the house Prosecco.