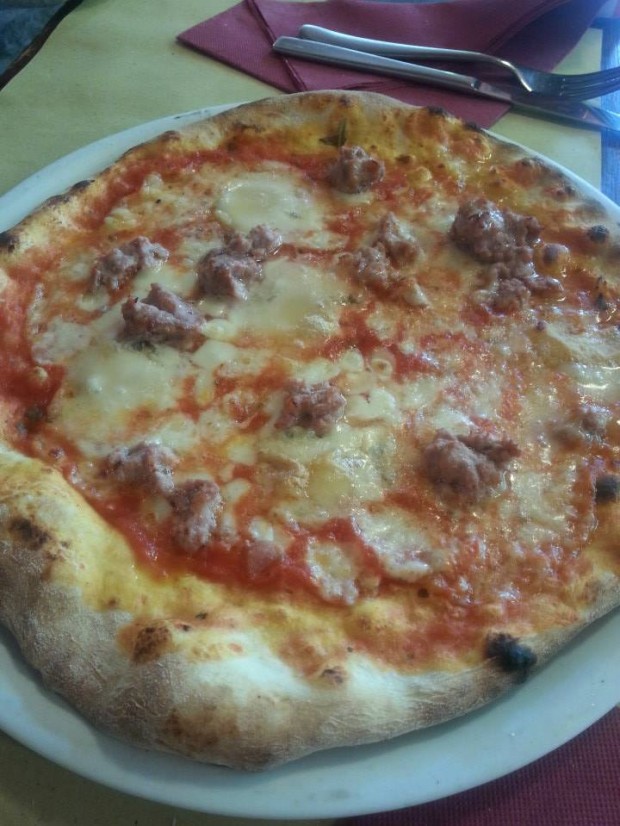 I’d always known Tuscany was big, but wasn’t aware it was quite so big – encompassing central Florence and then all the way across to the coastal cities of Pisa and Luca. So, I’m not sure how fair it’d be to stereotype all of the pizza I’ve tried into one region, so we’ll just take the average, rating wise.

The first Tuscan pizza was found in Florence, and considering I’d heard so much about the great food to be found in the city, I was pretty excited. However, in reality, throughout my journey through Italy, I’ve never struggled so much to find good pizza. Yes, there were snack bars, self-service canteens and cafes serving pizza everywhere, but at 3.50 euros for a dry, square piece of pizza, I was more inclined to keep searching. Before I get any eyebrow raises or ‘she’s so fussy’, I am convinced it’s not just my fussiness, as Jules and Kristine both agreed that the pizza didn’t look great. I think we must’ve walked about 10 miles in our mission to find a decent slice and  in the end we took refuge in a supermarket one – zucchini focaccia, which I personally really enjoyed. We ate four different slices while in Florence and unfortunately none of them were worth writing home about. None of them tasted fresh and all took on a spongier, denser base. The toppings weren’t overly generous either, but don’t worry, I haven’t ruled out Tuscany just yet! 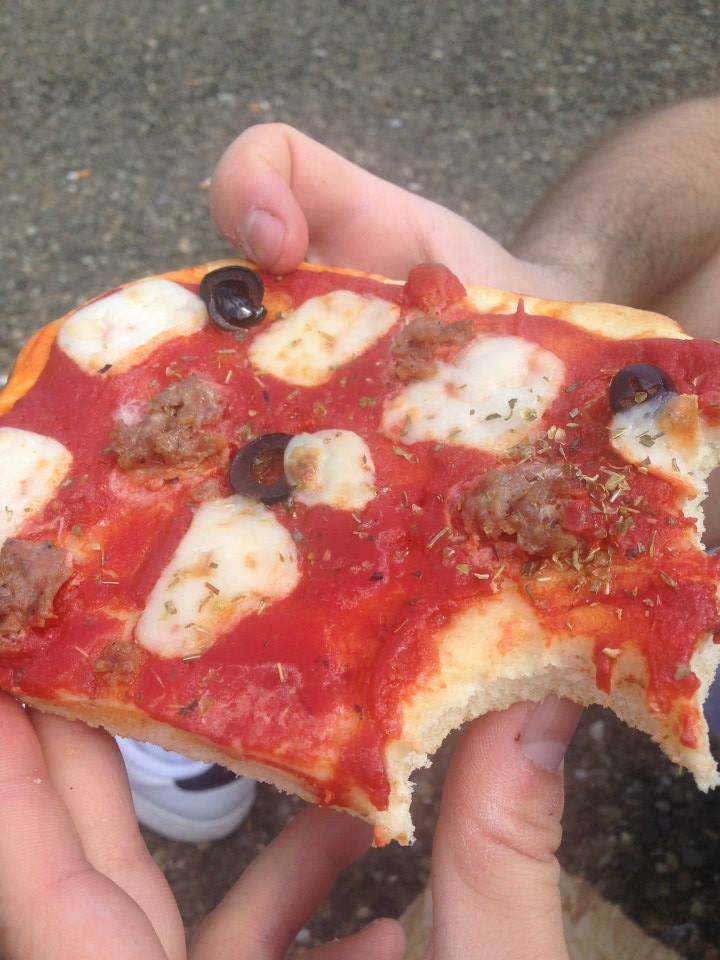 Our first taste of Tuscan pizza – doesn’t look great does it?! 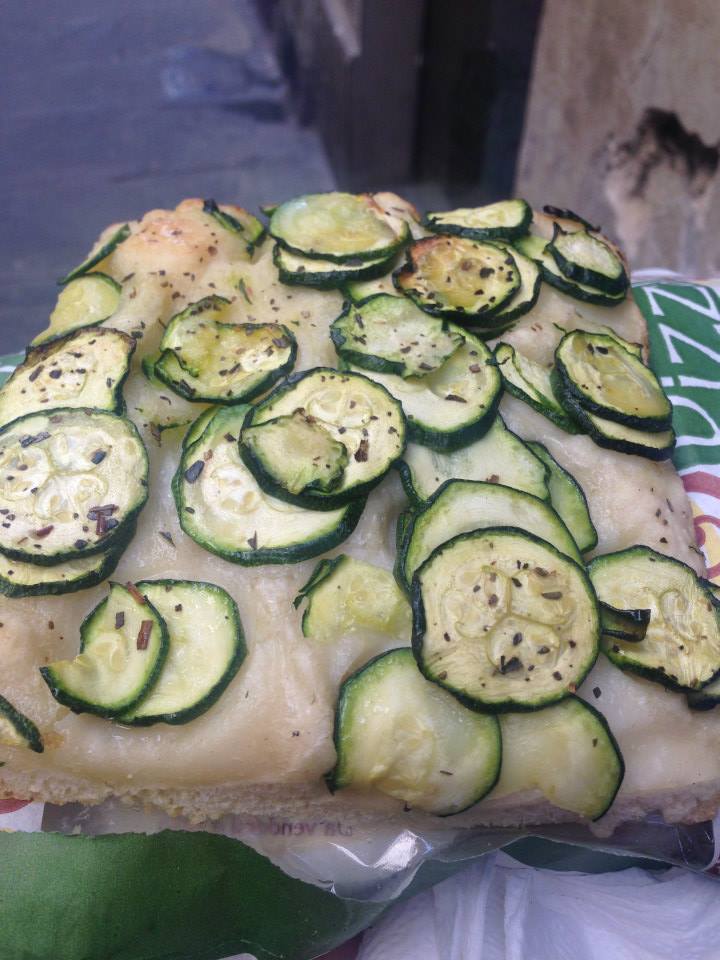 Next on my Tuscan pizza adventure led me to Lucca where the pizza found in take-away bars was completely the opposite to those found in Florence. Instead of thick and dry, they were freshly made, largely using a wood fired oven and were much thinner, and crispier. Yes, fresher food is 9 times out of 10 going to taste a heck of a lot better than pre-cooked, but Lucca definitely won the pizza competition with its thinner crust and piping hot toppings. However, in terms of a take-away snack, the square spongier pizza probably works better, as I had serious issues eating the thinner, wetter pizza on the go. I’ll leave you to imagine… 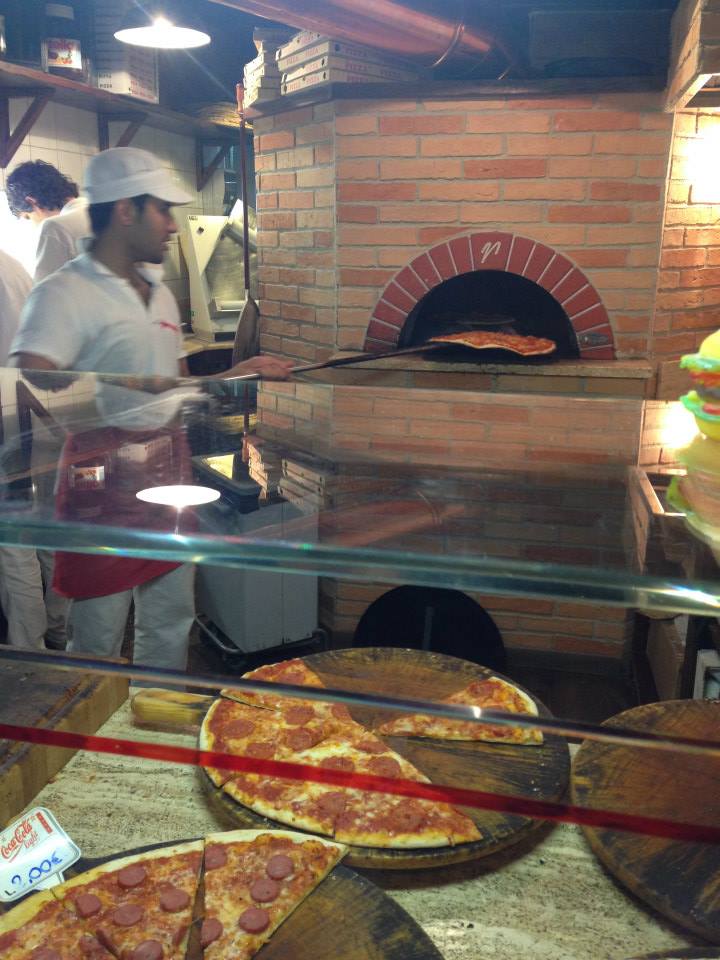 As I’ve spoken about before, the pizza found in snack bars/take-aways and restaurants is completely different so I made sure to eat at some local pizzerias. The pizza we had in Florence was cooked in a wood fired oven, Neapolitan style and sure enough, tasted 100x better than that found on the street. However, like the majority of pizzerias found in Italy, they opt for the Neapolitan recipe, rather than a local one. This should probably show me that no matter how proud Italians are of their regional cuisines, they largely agree that Naples wins the pizza test. Saying this, the pizza we ate in Lucca wasn’t Neapolitan! Sure, it used a wood fired oven but the overall effect wasn’t light, fluffy, with a charred crust. Instead, it was half the thickness and the sauce wasn’t anywhere near as soupy as what you’d find on a traditional Neapolitan pizza. And you know what?! I loved it… maybe helped by my hunger, but I’d go as far to say it was one of the nicest restaurant pizzas I’d eaten. Thin, crispy and well-seasoned and it didn’t soak up the toppings yet was still easy to eat – both with a knife and fork, and fingers. 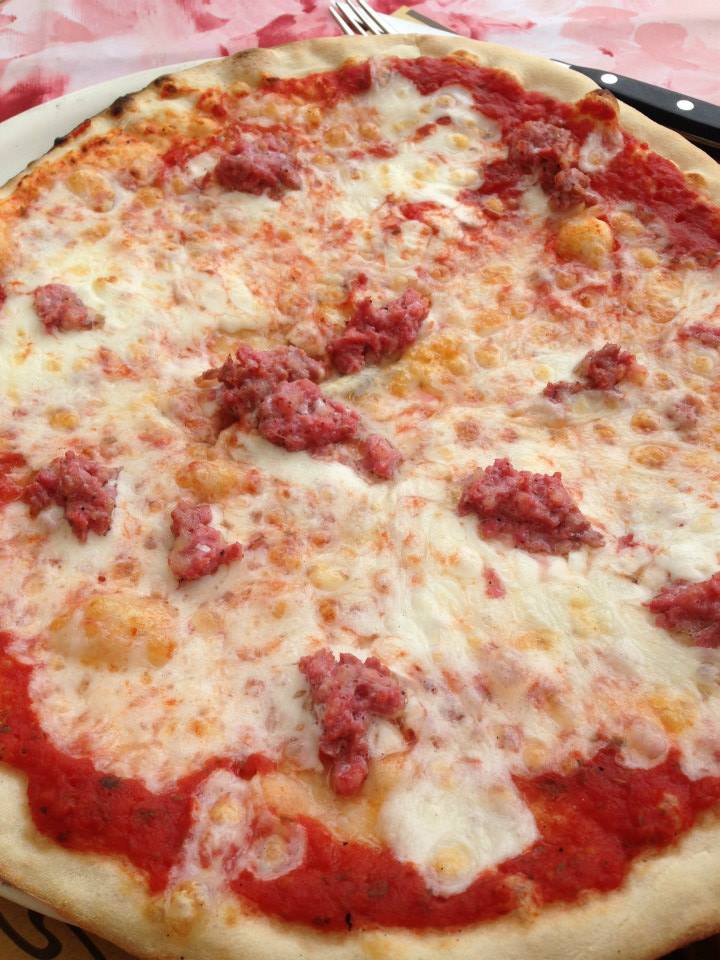 Sausage pizza from a Pizza Trattoria in Lucca

What I found interesting about Lucca and Pisa was that there wasn’t a great deal of take-away pizza on offer. There were a LOT of restaurants but in terms of getting a quick snack on the go, I only found 3 places. Each place offered mainly pizza, with definitely none of the variation you’d find in Naples, Palermo or Rome. You’d find pre-cooked dry looking pizza in a few of the cafes and bars alongside sandwiches and pastries, but it looked so unappealing, I’d recommend walking a little further. Florence largely offered paninis, sandwiches, tramezzines and pastries alongside their pizza, so in terms of the ‘foccacia’, it definitely seems to be a lot less common in the North, which I’m imagining has something to do with the lower olive oil production in these regions.

So, in summary I wasn’t overly impressed with the pizza I tried in Tuscany and won’t be using the recipes I found. If you’re reading this and thinking ‘she’s crazy, I had the BEST pizza in Tuscany’, then please do comment and I might admit defeat. However, I did try a lot and the pizza baby is subsequently growing.